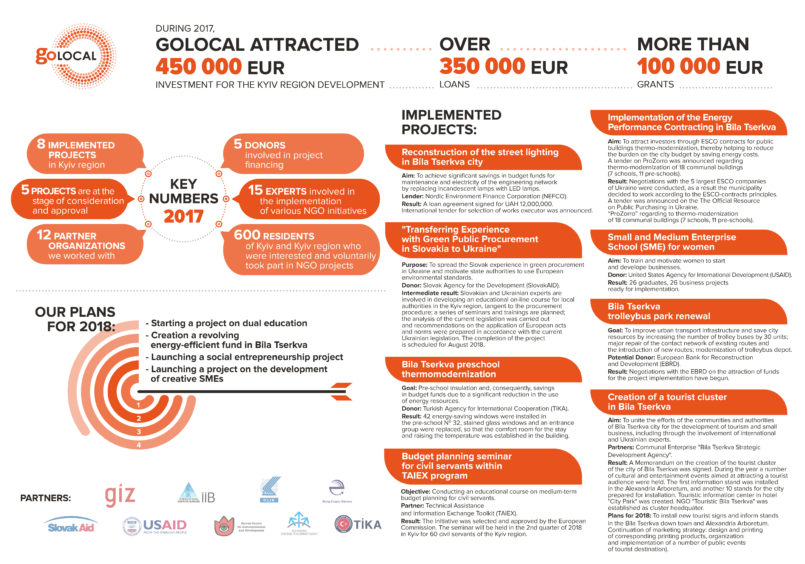 If we were asked to describe very briefly the results of 2017, we would say: GoLOCAL has raised 450 000 EUR of funds!

Almost half a million of EUR in form of grants and loans from international funds were acquired by GoLOCAL team for the Kyiv region’s development during the past year.

Our activities were mainly focused on the development of one of the largest cities of Kyiv region – Bila Tserkva city.

Over the past year NGO GoLOCAL started to implement 8 projects related to such important social areas as business development, modernization of preschool educational institutions, adaptation of Ukrainian legislation to European environmental standards, fundraising from international financial institutions. Some of these projects have been successfully implemented by the end of the year, and the rest of them will be finished in 2018.

In particular, a unique School of SME for women  was held in Bila Tserkva. As a result, we have 30 excellent business plans developed by our graduates, which we hope will be implemented in the near future and will definitely improve community’s life.

Supported by GoLOCAL team, a Memorandum on the creation of the Bila Tserkva Tourist Cluster was signed in March 2017. Thus, we’ve launched the tourism reform in the city which will be supervised by our partner –  Bila Tserkva Strategic Development Agency. For the years to come there is a plan to attract large-scale investments in the development of certain locations with potential tourist interest.

In 2017 GoLOCAL team conducted profound negotiations with the representatives of the largest ESCO-companies of Ukraine, who expressed their readiness to invest in energy modernization of the Kyiv region and of Bila Tserkva city in particular.

Together with the Slovak partners our experts have started to carry out the project aiming to implement the best European Union’s environmental practices in Ukrainian legislation. This refers to the Green Public Procurement. An educational online course for public servants, responsible for public procurement in Kyiv region, will be launched in the nearest future.

It is also worth to mention a great successful work done by our team in order to attract one of the biggest financing from the Northern Environment Finance Corporation (NEFCO) for Bila Tserkva city’s development. A number of neighborhoods will get the street lighting reconstruction thanks to the credit facility in the amount of 12.000.000 UAH.

All those projects make just a part of the work the GoLOCAL team managed during the last year. And we are proud of our achievements!

NGO GoLOCAL philosophy – is to work on projects aiming to promote regional and local development. Being inspired with this goal, our team will run the ongoing projects in 2018. Thus, during this year we plan to implement the following projects:

We also want to express our gratitude to all the partners and empathic citizens who have supported us. Our achievements – are the result of our mutual efforts. NGO GoLOCAL is always open for cooperation and partnership!